Dronetag has new product on market!!!

Congratulations to Dronetag team on the successul launch of the product – Dronetag MINI.

Dronetag Mini can be simply attached to any dron to bring it into line with new regulations and stay safe in the increasingly crowded drone airspace.

ESA BIC Czech Republic alumnus Dronetag has launched a small Remote ID device for drones that was developed through the ASPIRE with ESA programme. The Dronetag Mini can be attached to any drone to bring it into line with new regulations and stay safe in the increasingly crowded drone airspace.

Drone advocates have identified numerous business opportunities. However, the increasing numbers of drones already in operation have prompted concerns over future coordination and safety, leading to the development of regulations across the globe. As these rules for unmanned aerial vehicles (UAVs) start to come into force, Czech start-up Dronetag has developing a small device that can be added to existing drones to share their details with authorities and other pilots.

The Dronetag Mini offers both Direct Remote ID (broadcast via Bluetooth) and Network Remote ID (where details are sent to a central system via a mobile network and shared on the internet). The combination should not only meet current requirements but is also intended to make it future proof.

The device is “half the size of a muesli bar” according to Dronetag, weighs 32g and has a battery life of up to 14 hours, which the company claims makes it the smallest, lightest, and longest lasting currently on the market. It uses Galileo, GPS, GLONASS and EGNOS to obtain positional data, which it transmits along with the drone’s identification, and is accompanied by a mobile and web app. 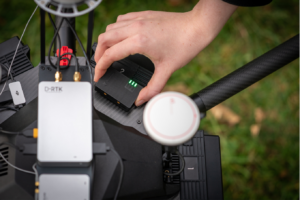 Offering the Mini as an add-on device should make it easier for drone operators to ensure their existing UAVs are compliant with local regulations.

Lukáš Brchl, CEO of Dronetag, explains: “The number of drones being used all over Europe has been growing very fast, leading the European Union to create new regulations. These can be restrictive if operators don’t have the right setup. Our device and app together make it easy to comply with these regulations and will help to enable applications such as drone shows and deliveries by drone, which we expect to become increasingly common.”

Dronetag developed the Mini through the ASPIRE with ESA programme, which includes zero-equity funding, technical and commercial guidance and access to ESA’s network and partners.

Brchl adds: “The support we received through the ASPIRE with ESA programme was invaluable in getting the Mini to this stage of being a commercially viable product. We wouldn’t be where we are now without both that programme and incubation at ESA BIC Czech Republic.” 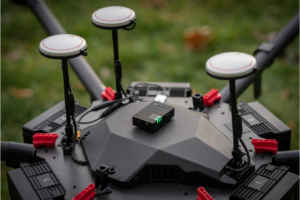 Save the date and enjoy the Get-together: Analogue missions

Join us at ActInSpace, go to Cannes and fly weightless aboard the A310 Zero-G aircraft!